U. R. WRIGHT OF WHEREATIN VA.

No. Umsteen hundred and forty ’leven

To those who—consarn it all, here goes:

I, U. R. Wright, of the Burg of Whereatin, Va., do hereby swear dreadfully, and affirm firmly that I have invented means whereby and by which a confirmed Bookworm may be relieved of all anxiety about reading too late at night, getting wet in the rain, getting overheated or run over by vehicles.

A small but powerful dynamo is strapped to the small of the back. On each end of the shaft is an aluminum flywheel covered with fly-paper and having teeth around the inner edge of the rim. Pawls fastened to the legs of the wearer engage these teeth and spin the dynamo when the victim walks along either fro or to, hither or thither. The current thus generated is led by small wires to storage batteries concealed in the high stove-pipe hat which goes with the outfit. So a man, thus fitted out, really has “bats in his belfry.” The top of this hat is the most ingenious part of the whole mechanism. It consists first of a shallow hard rubber pan, shaped much like a friction tight molasses bucket lid. In this lid are laid narrow strips alternately of copper and zinc, these being connected in parallel. On top of this is an image of Theodore Roosevelt, rampant, carved from a lump of copper sulphate or bluestone. More about this later.

Between the shoulders of the unfortunate is an umbrella which normally hangs down, closed, behind him. On the handle end of the umbrella is a segment of gears which engage with a small motor. Now the action is thus: When a shower starts, and the Bookworm is ambling along, face buried in a volume of “Deadwood Dick,” the rain drops trickle over the Bluestone image of “Teddy,” partly dissolving him and covering the zinc and copper strips with bluestone solution, thus forming an electric cell. (The bluestone image, after months of constant use, will acquire a likeness to William Jennings Bryan.)[1] The electric current thus set up actuates a switch which cuts in the storage battery to the motor which hoists the umbrella. There is a tiny hole in the bottom of the hard rubber lid or pan which contains the zinc and copper strips so that the bluestone solution trickles very slowly out, and down the back of the wearer’s neck. For this reason the patient must wear blue acid proof overalls. When all of the solution has run out, the switch is released and the umbrella is automatically let down to its normal position. 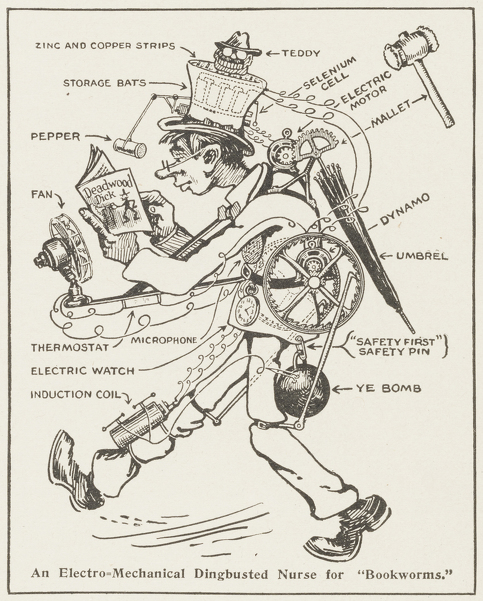 Strapped to the chest (if he has one) of the victim is a small electric fan in circuit with a thermostat so when it is warm the thermostat starts up a delightful mountain breeze.

Reading so much a man is likely to forget to wind his watch, so an electric watch is provided.[2] Injury to the eyes by reading in too dim a light is prevented by a selenium cell, which in dim light releases a switch operating an electro-magnet which pulls a lever to and fro rapidly, on the end of which is a pepper shaker. This shakes pepper in the eyes of the reader and thus calls a halt.

While crossing the street, interested in a book, one pays no attention to approaching autos and cars. A sensitive microphone worn on the person actuates a spark, which explodes a bomb under the coat tails of the bookworm, hefting him gently into the air, while the said vehicle saunters nonchalantly on beneath him upon its wonted way.

To prevent reading in bed too late at night, a 10-pound mallet is fastened in the umbrella socket, and at the appointed time the electric watch connects the circuit and the mallet descends upon the noodle of the victim, giving 40 swift swats, knocking him insensible till morning, when he is awakened by a shock of 10,000 volts from an induction coil.

In testimony whereof, I have hereunto appended my nom-de-feather this day, O Lord, preserve us from further attacks.

1. That a sculpture of Theodore Roosevelt out of electrically conductive sandstone might melt into the likeness of William Jennings Bryan when exposed to the rain is probably a dig at the latter, who had recently resigned from his position as United States Secretary of State due to his opposition to American entry into World War I after the sinking of the Lusitania.

2. The addicted reader shown wearing the bookworm apparatus is holding a volume of the popular nineteenth-century dime novel series Deadwood Dick (1877–97), authored primarily by Edward L. Wheeler (1854–86). This nod by Gernsback and his staff to the popular print tradition upon which they built is fitting, as Wheeler was unique among dime novel authors in his direct appeal to the reader, according to Christine Bold. This would make his stories especially seductive for hungry bookworms, “In his work, the characters take over all the authorial functions: they invent their own stories, they acknowledge the conventions of their existence and they recognize, finally, that these conventions derive directly from the commercial contract.” Christine Bold, “The Voice of the Fiction Factory in Dime and Pulp Westerns,” Journal of American Studies 17, no. 1 (April 1983): 29–46, http://www.jstor.org/stable/27554256. Bold cites Deadwood Dick as Detective (1879) in particular: “Fear not that man, for in your hour of need Deadwood Dick is on deck. When you least dream of it, he is lurking near, watching for your welfare, with a brother’s care, and removing such obstacles as will be apt to trip you and throw you into the power of enemies.”