At last wireless telegraphy has had its real christening. For the first time in history, due directly to wireless telegraphy a terrible disaster was averted and close to 500 human beings are now alive instead of resting on the bottom of the ocean, like so many others, before the days of wireless.

Only a few weeks ago there were many people who doubted the practicability and usefulness of wireless. In fact the public at large rather had an idea that wireless was a scientific toy, and on a ship nothing but a diversion for passengers, who had too much money to spend by sending telegrams, “which never arrived at their destination, anyway.”

All this has been changed in less than a week. Wireless has at last become public property, a position which it was denied for years. It has stood the fire test and has emerged from it gloriously.

Accidents such as the one just witnessed when the steamer Florida collided with the ill-fated Republic will soon become a thing of the past, thanks to wireless. Already the U. S. Government has taken steps to make wireless compulsory on ocean ships and other Governments will undoubtedly follow soon, as the tremendous importance of the subject has at last been realized.[1]

However, when talking of the Republic, let us not forget its gallant wireless operator, John Robinson Binns, the now famous “C. Q. D.” man. It was due chiefly to his efforts that the passengers of the Republic were saved so promptly without the loss of a single life. He has set an unforgetable [sic] example to all wireless ship operators and has shown us what the duties of the operator are when his ship is singing. His story will be found elsewhere.

The announcement of the Wireless Association of America in the January number has brought such an avalanche of mail that it is impossible at this date of writing to do the entire correspondence justice. Members and prospective members will please have patience, all letters will be answered as fast as it is possible to write them. Apologies are also due new members who ordered the association button after January 15. As stated in the January issue only 1,000 buttons were ordered; this entire amount has been mailed about the 15th, and the second thousand could only be sent out by January 26th. The delay in shipping was unavoidable, as the great demand has not been anticipated, and the editor trusts that the new members will understand the situation now.

The editor is truly amazed at the tremendous interest shown in the association, and as up to this writing over 3,200 members have applied, it is safe to say that the Wireless Association of America is the largest official wireless association in the world.

A membership application card has been issued which will be sent free of charge to any prospective member.

The demand for the association button is so tremendous that we will possibly run short again. Every mail brings dozens of orders, and if you do not receive your button at once, please do not get impatient. The buttons are shipped just as quick as the factory can turn them out and just as quick as our mailing department can address and ship them.

Members are requested to be kind enough to refrain from asking for information as to members near their localities at least till the 15th or 20th of this month.

On account of the great amount of work necessitated in classifying and assorting the membership cards and the mail, it will be an impossibility to furnish any information before that date.

The Editor, in behalf of the Wireless Association of America, wishes to thank all members for the interest shown and trusts that by next month the amount of members will have doubled. 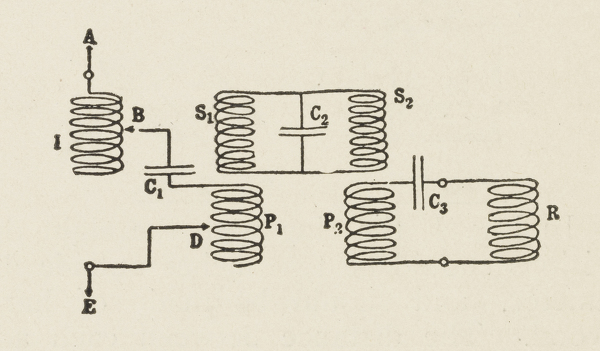 At the recent exhibition of the Physical Society in London, the Marconi Wireless Telegraph Company showed a multiple tuner for tuning a wireless telegraph receiver so as to render it immune to interference from other stations. It can also be used for measuring the lengths of the transmitted and received waves and for estimating the distance of a known station. The instrument has been designed so as to stand several climates and comparatively rough usage, and is suitable for all wave lengths from 300 ft. to 8,000 ft. Its general principle is shown in illustration where A represents the aerial, E the earth, R the receiver or detector.[2]

By Our Martian Correspondent

Mr. Spif Marseroni, the great national wireless scientist, has scored another great triumph.[3] As will be recalled, Martians have been for a long time in the habit of receiving and sending telephone messages, no matter if they were walking in the street or gliding in an aeroplane. In fact, this system is now so popular that the “Interplanetarian Remembering Co.” has found no trouble whatsoever in getting over 60 million subscribers to their new system. The system is simple enough.

Suppose you are a busy man. During the night you suddenly recall that you must see a certain party to-morrow afternoon, 4 p.m. While you stay in bed you call up the Remembering Co. and tell the operator to call you to-morrow afternoon at 3.30 p.m.

Next day at 3.30 p.m. the little buzzer which you carry in your vest pocket suddenly “goes off” and when you put your pocket phone to the ear a young lady will tell you in a silver voice, that you have to meet a party at 4 p.m. The service of the new company is so efficient that it does not make much difference where you are. The Remembering Co. will locate you, whether you are taking a bath, or whether you are napping in a Morris chair in the lobby of an airship.

It will also be recalled that Mr. Marseroni is the inventor of the Telewirltransport. This as will be known, has been considered up to a few days ago, his greatest invention. By means of his system Martians may ride on electric motor rollers, the energy being supplied from a central station wirelessly through the ether. The power on all Martian airships and aeroplanes is furnished wirelessly to them from the same central station to which the users must be subscribers.

Now Mr. Marseroni has succeeded by conveying food through the ether wirelessly for unlimited distances. Already a large syndicate has been formed under name of “Interplanetarian Wireless Food Co.” to exploit the invention. If you are a subscriber and you are walking in the street, and if it is 12 o’clock noon, your call buzzer suddenly rings. You put the phone to your ear and this may be what you hear:

“Luncheon ready, please. What will you have?”

“Ham sandwich and a glass of milk,” you call back.

You then draw your silver case out of your pocket and connect its terminals with your antenna, fastened on your hat. Two seconds later and a ham sandwich has “materialized” in the silver case. The milk is received in the same manner. In fact, Mr. Marseroni has succeeded to send almost anything now from champagne down to lobster salad. The only thing he does not send are onions, as the odor is lost in transmission and an onion without smell is like a river without water.

The process of sending food by wireless is not as difficult as might be thought at first.

The food is passed through “puffers,” which blow it to atoms step by step. It is finally reduced so much that its consistency is brought in “balance” with the ether. It is then passed through a system of Leyden jars and sent out in form of ether waves, carrying the infinite minute food particles. The receiving apparatus condenses these particles again and the food appears in its original condition, only far more palatable.

Of course the sending operator must be careful so as not to “mix” things, as in the beginning it happened a few times that a subscriber got hot when he received coffee mixed with chopped pickles or buckwheat cakes soaked in Worcestershire sauce.

However, by using tuning separators this defect has been entirely overcome now.

1. The RMS Republic was a luxury steamship that collided with the SS Florida on January 23, 1909. The ship was equipped with a Marconi-designed wireless set and became the first ever to send a “CQD” distress signal, effectively saving all 1,200 passengers aboard. “Official Story of the Florida,” New York Times, January 27, 1909. The operator of the wireless aboard the Republic was Jack Binns, who became a hero among the amateurs and was later hired as a correspondent for the New York Tribune to report on the activities of local tinkerers. For more on Jack Binns and the collision, visit http://www.jackbinns.org/the_republic-florida_collision.

2. Tuning wireless sets so that they did not transmit and receive on one wavelength only was still a great challenge at this point.

3. This section was included as part of the regular “Wireless Screech” humor section and written under the pseudonym Mohammed Ullyses Fips, a name that Gernsback used for all of his tongue-in-cheek columns throughout the years.