. . . in which the Editor reviews three eras of economic change, which the development of radio art has brought about in this industry . . . and heralds the expected arrival of a fourth, due to the concentration, in the hands of a few large concerns, of the manufacture of receivers . . . why this must result in the division of radio set production between “the great industry” and the building at home, for personal use or on a custom basis, by constructors . . . how conditions will favor the professional set constructors in obtaining a good volume of business . . . and therefore continue to encourage the manufacture of component parts.

The great revolutions are those that are silent, and almost invisible. Usually, the greatest revolutions are economic in their nature, and therefore not seen immediately, but they are prolonged over a considerable time. The radio industry is now in the midst of one of these major revolutions, which may change its entire aspect during the next few years.

Let me review what happened in radio, even before broadcasting began. Originally, back in 1910, the radio industry, just coming into life, was content to build and manufacture parts which were sold to the radio amateur. The amateur of that day bought the various parts and promptly screwed them down to an old table. This was his radio set, with which he received “wireless” code from other amateurs, from commercial stations and ships.

About 1916, the manufacture of the first complete sets began. They were more or less self-contained, but necessarily rather crude, to our present way of thinking. But still separate parts, in value, formed the greatest proportion of sales by the radio industry.

When broadcasting started, in 1921, the sale of parts to the public immediately jumped to a tremendous figure; and it was some time before the sale of completely-manufactured sets took the lead and exceeded that of parts. Then gradually the ready-made factory-built set came into the ascendancy and greatly eclipsed the sale of separate parts. That is the situation which we have at present. Though in 1922 and 1923 every radio dealer stocked an immense number of parts and but few sets, the situation in this country has been reversed since then, and there are now comparatively few dealers who stock parts. Most of them nowadays stock a complete line of sets and accessories.

There is, of course, a great difference between parts and accessories; parts being usually taken to mean those items that go into the manufacture or construction of a radio set, whereas accessories are the articles that are necessary for the operation of the complete set. Under accessories are listed such articles as tubes, batteries and socket-power units, loud speakers, headphones, etc.

But it is believed that we are now facing a silent revolution and that the order of things is to be changed once more. The reason is purely economic, and found primarily in the patent situation.

The Radio Corporation of America, and its allied interests, who always have been in the lead, as far as radio patents are concerned, have during the course of years acquired practically all of the important radio patents in this country; and they are therefore in a position to impose terms on all who have infringed their patents. Of course the cry of “monopoly!” will, as usual, go up; but the point remains that, after all, every patent is a monopoly, and that any one to whom is issued a patent must protect his rights—otherwise he stands to lose them. In upholding the rights to its patents, the Radio Corporation, after all, is within its rights, and will now reap the benefits from the patent situation.[1]

As generally known, practically every one of the large radio manufacturers is now paying a royalty of 7½ per cent to the Radio Corporation, with a clause of $100,000 per annum minimum royalty. This, of course, means but one thing, and that is, the price of radio sets must go up. Furthermore, the small set manufacturers will no doubt go back into the parts business; as the Radio Corporation will probably license only those who are financially responsible (and it may be presumed that most of the smaller ones probably are not in a position to guarantee a minimum royalty of $100,000 per year).

What has been predicted for a number of years has thus come to pass. The radio set business will be in the hands of a few strong corporations, which will control the legitimate set business in the United States on a highly competitive basis. All other reports to the contrary, this certainly is not a general monopoly of the set business; and we believe that, in time to come, it will work out to the advantage of the public.

But what about the parts business? It is believed in many quarters that, because of the conditions just mentioned, the general parts business will come back with a grand rush. Parts manufacturers, of course, sell their merchandise to set manufacturers; and this outlet, frequently, is their largest source of income. But outside of this, they sell their merchandise to radio dealers and to professional set builders. From present indications, there will be a great and immediate demand for parts; because the small set manufacturer, being put out of the way, will leave the road clear for the professional set builder to come into his own.

The man who builds a set now and then, in his attic, is not likely to be worried by any patent situation, nor will the radio interests be much concerned about professional set builders. Quite the contrary, the Radio Corporation has always maintained that it encourages the amateur and constructor. More than ever, no doubt, the big interests now feel that they have little to lose on account of the set builders. Nevertheless, during the next year, a vast quantity of radio sets and power packs will be manufactured and made by these professional set builders, who do a very sizable business in these transactions. It is a peculiar situation, but one very well understood by radio economists, that there is always a healthy demand for the home-made set. It works out somewhat along these lines:

A set builder or an amateur sees a new circuit described in Radio News, or elsewhere. He promptly builds it and finds that it works well. A few of his friends or acquaintances see and hear the set and are impressed by it; because, as is usual in such cases, it is the latest thing. They immediately wish to get one like it; and, right away, the set builder is busy making two or three sets for his friends at a nice profit to himself.

The large set manufacturers, as a rule, change models only once a year, and, therefore, at some time during the year the radio art will have advanced somewhat beyond their facility to follow. Of this situation the professional set builder takes advantage by incorporating the latest advances in his set.

There are always several hundred thousand people in this country who build sets either for themselves or for friends; and this number is likely to increase materially in the immediate future, because of the economic reasons just explained.

Summing up, therefore, these facts, it is reasonable to predict that the radio parts business during the next few years will show a very large and healthy growth. 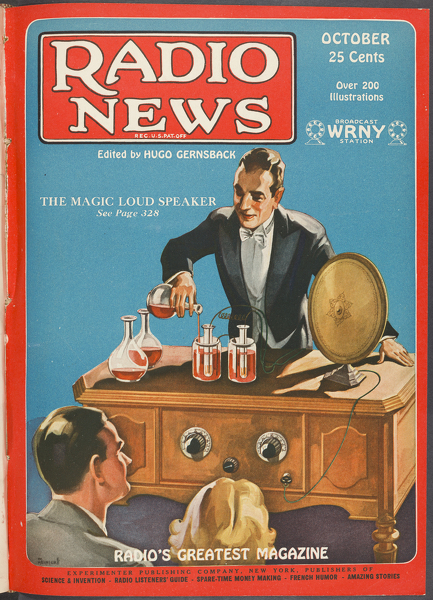 1. The Radio Corporation of America was formed in 1919 as a “private” company that could take over all of the patents that the U.S. government had seized during World War I. Tim Wu: “Structurally the RCA was rather like the BBC, a national champion; but unlike the British company, it was neither established nor sustained with public duties. Rather, in 1919, the RCA was formed mainly in response to the navy’s insistence that all vital radio technologies be held by an American firm, in the interests of national security. And so RCA was fashioned out of the existing American Marconi Company to pool and exploit the rights to use more than two thousand patents owned by General Electric, United Fruit, Westinghouse, and AT&T.” Tim Wu, The Master Switch: The Rise and Fall of Information Empires (New York: Knopf Doubleday Publishing Group, 2010), 79.

For more on the government’s patent seizure, see Silencing America’s Wireless in this book.