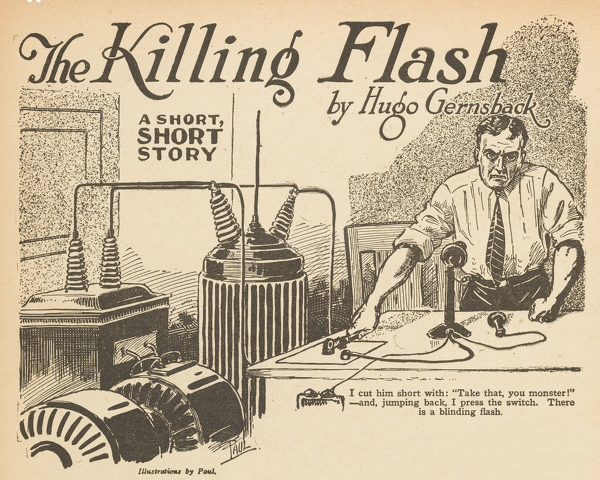 Yesterday Lindenfeld signed his own doom, although he did not suspect it.

Years ago it started at college. I stood one sly insult, one injury after another. Always he came out on top. Always he won. I was always the vanquished, the one bested. He beat me in every sport and every competition. So that, at the end of the term, we were bitter enemies.

But, by that queer chance of destiny, it did not stop there, for we both settled down in Beauford; and, by another stroke of Fate—that irresponsible goddess who often governs our lives—we both went into the same line of business, almost at the same time. It took each of us a few weeks to find this out, and then it was too late. My pride forbade me to go into another venture, so I stuck it out. Within the year, Lindenfeld had put me out of business. That, however, could have been endured; but not his last and crowning insult.

Yesterday, he eloped with my fiancée. That signs his death warrant. Of the long list of insults, offenses, and near-crimes, this one must be the last. The sooner the world is rid of this monster, the better.

As soon as he returns, I shall kill him with my own hands, but so subtly, oh, so subtly, that only he will know that I killed him. And no one will know how he met his death.

As a scientist, this should be easy for me. I will use an entirely new method, something new in murder. Simple. Yet subtle. Very. And the police will never find out how it was accomplished, because I will kill Lindenfeld by long distance.

This is the plan. I will rent a little loft in the busy east end of the town. Here I will gradually assemble my high-tension apparatus, a 5-kilowatt generator, a 350,000-volt step-up transformer, condensers, and various other electrical paraphernalia. When everything is connected up, I will attach the output of the 350,000-volt transformer to my telephone line. I will then call up Lindenfeld on the telephone and make sure that it is he who answers. I will make it my business to find out that he is home alone. I can readily find that out by one or two extra phone calls to his house. Then, when he answers me, I have but to step back from my phone and press a switch which controls the 350,000-volt high-tension current. The deadly current will leap over the telephone wire to Lindenfeld’s house. A long spark will jump between the receiver and the transmitter, and as Lindenfeld’s head is between them he will be electrocuted instantly—not, however, without first having heard my voice.

Everything is in readiness. The machinery is installed. It works beautifully. Of course, I rented the little place under an assumed name, and I wear a disguise. No one can trace me, even if they knew how the beast was killed. Most murderers overlook one little detail. I don’t. Everything is planned scientifically. Minutely. Painstakingly. I put a phone call in five minutes ago. I asked for Mrs. Lindenfeld, my former sweetheart, in a disguised voice. He answered, the cur. She is out.

I cut him short with: “Take that, you monster!”—and, jumping back, I press the switch. There is a blinding flash, as the transformer discharges into the telephone line.

THERE HAVING been no short, short science fiction stories published heretofore to the best of our recollection, for the benefit of our readers, the editor had to undertake the thankless job of creating a model (?) story.

Authors and would-be authors of short, short science fiction stories, can see from the sample that it is possible to put quite a mass of material into 1400 words without sacrificing either science, action, or plot. And the space allows the inclusion of one or more surprise endings.

It is hoped, however, that future authors will not be unduly influenced by the vehicle used, or the treatment which Mr. Gernsback has given this story. ←

We received your interesting letter, as well as the manuscript entitled, “THE KILLING FLASH.”

You ask our advice whether or not it is possible to kill a person over a telephone line as indicated by you in your ingenious manuscript.

For the benefit of the country, we are glad to state that we believe the scheme to be impractical.

While there are isolated instances of people having been killed by high-tension discharges, due to telephone wires having crossed with power lines, such cases are exceedingly rare.

The reason is that the high-tension discharge usually becomes grounded before it has traveled 100 feet over the telephone line.

In your case, the suppositious Lindenfeld would no doubt, have heard a series of loud noises in his phone, but he would not have come to harm.

(Newspaper account from the afternoon edition of the Beauford Eagle.)

John Bernard, 26, of this city, single, manufacturer of patented appliances, was found dead this morning in a loft at No. 627 East Worth Street. His terribly mutilated body was identified by Henry Lindenfeld who, it was divulged, owned the loft.

From an unopened letter, found at his residence, with an enclosed manuscript sent by The Beauford Telephone Co. to him, it is clear that he planned to kill Henry Lindenfeld by connecting a 350,000-volt high-tension transformer to the telephone line. Upon calling up his enemy, he is presumed to have closed the switch which was to electrocute Lindenfeld.

Bernard, however, never received the letter from the Beauford Telephone Co. telling him his murderous scheme was impractical as, indeed, it proved to be. Lindenfeld at 9:30 P.M. yesterday received a telephone call from Bernard who spoke threateningly over the ’phone, ending up with: “Take that, you . . . .” That was all. Lindenfeld hung up his ’phone and later retired.

But as Bernard pressed the switch, 200 lbs. of high explosives stored on the floor above—no doubt set off by the high-tension discharge traveling along the joint telephone cable to the next floor—blew up and in the wreck Bernard was crushed to death, hoist as it were by his own petard. His funeral will be held from Levitow’s Funeral Parlors tomorrow.

Office of the Editor

Sorry to find it necessary to return to you your manuscript entitled “THE KILLING FLASH.”

It is a nice story and fairly original; but there are a number of weak points which should be eliminated before we can use the manuscript. For instance, the worst is that, in the story, Bernard certainly would not have written to the telephone company telling them about his plot to kill Lindenfeld. That would, of course, have caused his arrest.

Then, too, the story is improbable; because Bernard, if he had any sense, would not have written down the assertion that he killed Lindenfeld. If you can fix these various points, maybe we can use the story.

How to Write “Science” Stories