Thesis 6. On the Noli me tangere

The handling of an advenience resists the kind of penetrative touch that wants to expose the truth of an object. Rather than expositive, an aesthetics of politics is in the mood of the noli me tangere: the “do not touch me” or “do not withhold me” of the appearance. The noli me tangere regards an intangible hapticity that discomposes the expectations of possession.

LET US HANDLE SOME IMAGES. The figures below are famous and taken from a biblical iconography of the story of Jesus. Their theme is that of the hapticity of the image—specifically, the image of a deity—and they depict two instances of touching (or not touching) the figure of Jesus in his role as the resurrected divinity.

Both works are remarkable.

In Caravaggio’s Doubting Thomas (Figure 1), the doubting disciple thrusts his hand into the side of Jesus in order to perforate his existence and confirm his resurrected actuality. Thomas’s touch at once wants to expose and possess evidence of Jesus’s resurrection. Here the extended hand that handles the wound penetrates the source of the sensation of belief so as to confirm that the image of god is indeed present. Such confirmation promises to relieve the pangs of doubt. Thomas’s touch clutches the wound; it is an ostensive touch (like the one above described by Wittgenstein in his account of the philosopher’s “this”) that wants to point to the source of the sensation in order to hold on to one’s faith. And notice, too, Caravaggio’s subtleness in presenting us with two tears in the painting: Christ’s wound and the seam of Thomas’s torn garment (upper left shoulder). They are perpendicular to each other, they are painted along the same axis, and they are practically identical—and yet completely different. It’s almost as if Caravaggio wants us to believe that one wound is real while the other is decorative—which would be completely in line with the thematics of the painting: here is the real image of god, Jesus Christ the mediator of truth and falsity. All you have to do is thrust your hand in the wound in order to look and see for yourself. Of course, the point of Caravaggio’s painterly tear is not to prove the difference between a real and an ornamental wound, but to put on display the urge—and the temptation—of indexicality and verification. Thus, through Thomas’s gesture of adhesion to a lesion, conviction is transformed into belief and a sensation is given a legitimating ground. Caravaggio’s Doubting Thomas, in other words, dramatizes a desire to know the image, to touch it in such a way as to penetrate its externality and possess the source of its sensations so as to nail firmly in place the relation between sensation and reference. 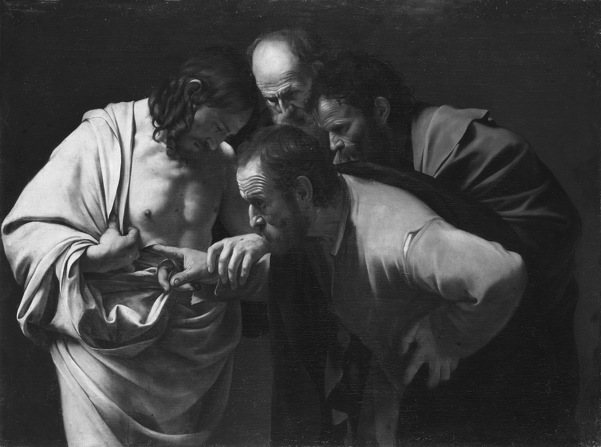 The curious thing, of course, is that the event depicted in this painting has no biblical source. As Glenn Most has shown, there is no textual evidence of Thomas ever touching Jesus’s wounds.[1] Thomas does doubt the existence of a raised body, but he does not touch the wound. Rather, imagining the touch as a hold is an artistic rendering of the prurience of iconographic hapticity: it does not represent the passage, but marks an aspect of the passage that regards the intense human desire to know and verify the impossible source of an advenience.

The second image we’ll look at is Pontormo’s Noli me tangere painting (Figure 2), which thematizes another order of hapticity that, we can say, lies closer to the practices of be/holding of an aesthetics of politics. This biblical scenario predates Jesus’s encounter with the Doubting Thomas, but not by much. It refers to the moment when Jesus exits the tomb on the third day after his crucifixion and encounters Mary Magdalene who is in the garden, mourning his passing—a picture of the event of advenience if there ever was one. Astonished by his luminescence, Mary lunges towards Jesus in a dance-like embrace (as Pontormo pictures the gesture) while he sashays away from her, uttering the negative injunction noli me tangere (in Greek, mê mou haptou): “do not touch me,” or “do not withhold me,” or “do not hold me back.” We might wish to paraphrase as follows: “be/hold me without possessing me,” “hold me in your regard without clutching me.” The interval of the noli me tangere, in other words, pictures the intangible hapticity that we lend an advenience, an ungraspable caress that attends to the appearance as it advenes. In this interval, there is a play of hapticity that never actually resolves but that nonetheless invites our ability to absorb and bear the scene. The be/holding that the advenience of appearance invites makes untenable the claim of possessive exposition: one cannot own an experience of advenience. On the contrary, the interval of advenience calls forth a curatorial regard of and for that which appears. 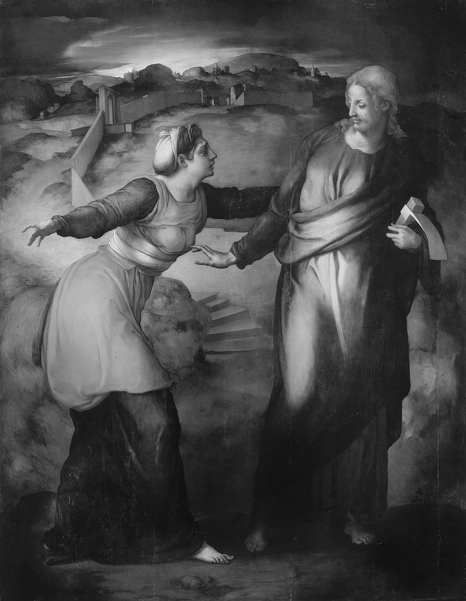 In his study of the relationship between sight and touch, spurred on by his looking at some noli me tangere paintings, Jean-Luc Nancy says this:

What is seeing if not a deferred touch? But what is a deferred touch if not a touching that sharpens or concentrates without reserve, up to a necessary excess, the point, the tip, and the instant through which the touch detaches itself from what it touches, at the very moment when it touches? Without this detachment, without this recoil or retreat, the touch would no longer be what it is, and would no longer do what it does (or it would not let itself do what it lets itself do). It would begin to reify itself in a grip, in an adhesion or a sticking, indeed, in an agglutination that would grasp the touch in the thing and the thing within it, matching and appropriating the one to the other and then the one in the other. There would be identification, fixation, property, immobility. “Do not hold me back” amounts to saying “Touch me with a real touch, one that is restrained, nonappropriating and nonidentifying.” Caress me, don’t touch me.[2]

Nancy is talking about an experience of encounter that resists the possessive grasp of referentiality. He is, in short, talking about ownership and appropriation and how through the interval of advenience we encounter the possibility of there being a non-possessive hold—a be/holding. Alongside the history of liberalism’s possessive individuals, we might conclude, there is a parallel and minoritarian history of aesthetic dispossession. Within this trajectory we learn that the advenience of an appearance resists the possessiveness of referentiality, and thus the kind of knowing that bespeaks epistemic ownership; but it also resists the possessiveness of the desire to hold, own, and use that which is ontologically intangible. What does it mean—we ask once again—to hold an appearance? An appearance cannot be held but can only be be/held. Thus concerns over possessive individualism are replaced by concerns over the organoleptic assignments and dispositional structures that are the matters of course for our attending to the disjunctures between person and world, between sensation and reference.

And is this not the problem of citizenship itself? Is citizenship not the advenience of a political subjectivity that has neither place, nor name, nor status, nor part; someone or something that cannot be held in its proper place? One of the crucial characteristics of the rise of the citizen–subject in the eighteenth century is the fact that it emerges out of a series of conditions of discontinuity: the citizen possesses neither title, nor rank, nor status. As such, it resists all systems of signification that require the holding of a name in order to count. That is, the noli me tangere of democratic citizenship resists the expectation of counting tout court. The citizen literally does not count—it does not refer to anything—because the citizen has no part. She is a partiality. Possession and reference, we might say, do not count in the face of the advenience of citizenship.

The crucial problem for an aesthetics of politics is thus the following: if the advenience of political subjectivities appear but do not count because an advenience is supernumerary to any criteria for counting, then what are the practices of handling and modes of attention we dispose to the noli me tangere of advenience?