5. The T-Shirt Phenomenon in China

TRAVELING—at least for me—always produces a tension between the familiar and the strange.[1] An airport, for instance, classically fulfills this duality. As you meander through Dubai, London Heathrow, Hong Kong, Shanghai, Tokyo, Melbourne, or Singapore airports, the shop names cater to the familiar quality of international brands that you can also readily identify in shopping malls and city centers wherever you live. You will see Valentino or Lacoste or the bag shop Coach interspersed with a Swarovski and a Prada. The faces of these brands also provide a comforting community of images. I think I have seen Hugh Jackman’s face with his Montblanc pen in every one of the ten international airports I have visited in the last year. This array of international personalities and brands links with the structured flow of airports—the signs that point to gates, the general patterns of how people negotiate the airport experience and safely depart by air or on the ground. 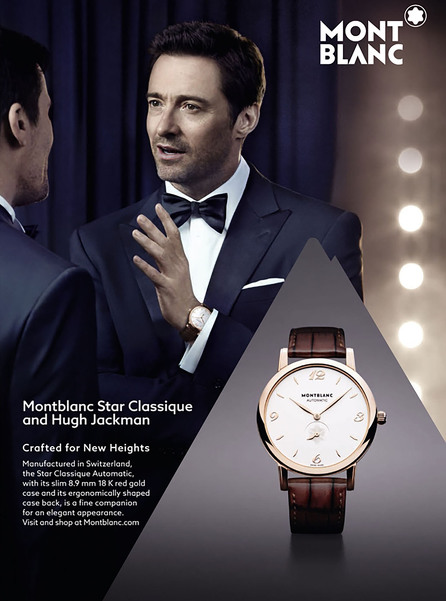 Hugh Jackman in Montblanc’s advertisement—everywhere you want to be.

However, airports also situate you in the strange. Even basic rules shift from country to country; for example, walking on the left or the right or relative and newly appropriate proximity to others are things that still churn at airports as the new regimen of deportment of self only begins to shift your own individual behavior. The different dominant language is the most obvious example of the shift, but there are others. Sidling alongside the recognizable faces of stars and their associated brands are other “personalities” that by their size and position should be recognized. The Emir of the United Arab Emirates is ubiquitous in the Dubai airport, sometimes as a cut-out that resembles a movie star in a video shop, sometimes on large, glossy billboards. In different Asian cities I have passed through, there is an array of “famous” people whom I can spot by their visibility and evident glamour via images and posters in public places like airports, but I just can’t identify them. These are the obvious differentiations in how the strangeness of new places is sometimes presented to us: we can’t read the public personality system. We know the signifiers of the famous—in some way, these have become internationalized as syntactically recognizable codes of value—but their identities are a mystery.

Understanding the familiarity and strangeness of place for the traveler can be characterized in many more ways than acknowledging how the public personality system is sometimes recognizable, sometimes translatable, and sometimes entirely foreign. Nonetheless, thinking through the way in which public personas are differently constituted opens new views to a particular culture and the way that it presents itself publicly.

In the last few years, I have had the opportunity to observe a little microcosm of how persona is presented publicly in China that has helped me understand how persona can be quite differently constituted in different settings. As a distinguished foreign expert at Central China Normal University (CCNU) in Wuhan, I lived on the pretty campus along with about twenty thousand students and university staff and their families. In some sense, it was a village embedded in a very large city with a series of gates connecting the two. People wandered around the campus’s tree-lined streets from class to canteen, from basketball courts through gardens and back to their apartments.

Like international airports, the university resembled other universities around the world and presented a familiar enough terrain for someone like me to feel, if not at home, at least comfortable in my capacity to navigate. Of course, there were differences that made it difficult to decipher and, at times, a puzzle.

One of the most interesting differences was what I thought was a peculiar dress style. Thousands of students chose to wear T-shirts with English words prominently proclaiming something. I know this presentation of self no doubt produced a bigger effect on me. I couldn’t read Mandarin, so much of the textual world of the campus, and the city as well, was opaque to me. And, surprisingly, in the midst of this Chinese campus, where almost no English was spoken and, likewise, I was relatively mute, were all these words on T-shirts “speaking” to me as students walked by me.

What was equally surprising to me was that many of the expressions on these shirts were nonsensical or at least challenging to interpret. Here is just a short list of what I read and recorded:

Eyes without the cloudiness

Play Hide and Seek with me

The range of these English expressions was truly amazing, and I began collecting them and trying to divide them between male and female wearers. Interspersed with these more bizarre expressions were the usual brands, such as Adidas, Coca-Cola and Seagram’s 7, and some shirts appeared to be identifying where the individual had traveled (e.g., “I heart Italia”). In addition, quite a number attempted to express things in French (“Mo Amour Paris”). Whether in English or French, incorrect spelling was regular.

It became clear through conversations with some of the students with whom I had the opportunity to discuss this T-shirt phenomenon that, more or less, students were generally unaware of the English meanings. In other words, young women conveyed that they had chosen the letters and designs because they looked good. In general, the foreign words were a sign of some value, a kind of low-level reading of “cool,” and the English meaning was meaningless. For some, it was linked to the culture of “cute,” and it was less the words than the other images of cute anime-inspired animals that were often also on these tops that made students both buy and wear them. In contrast, it was exceedingly rare to see Chinese characters or scripts on any clothing.

It is very important to admit that the complexity of how a public persona is constructed and its dependence on specific national, regional, and ethnic, if not family, dimensions mean that my ability to decipher this T-shirt phenomenon in Wuhan, China, is limited and is much more a considered conjecture about what it means. The reading of the public display of the self identifies the differentiation that is at play in the way that individuality and its public presentation operate in different settings. Some of these factors are what I would identify as “extrinsic” qualities. For instance, students wearing T-shirts is something that you would see in many countries, and it becomes a means of identity display transnationally. Indeed, the wearing of English-texted T-shirts is something you would see throughout Asia in some form or another. For example, in Japan, this externalization of Western texts is very much explicitly related to international brand names, and the text itself becomes a moniker of taste and value attached to commodity culture. This outward expression by individuals of brand culture is making the public self part of transnational flows of value: it is an extrinsic quality.

In the Wuhan instance, the use of English is both an extrinsic and “intrinsic” quality of persona. Appealing to a foreign language to express the self publicly is interesting and only appears to be extrinsic. Because the actual words used and the expressions generated are not necessarily important, there is something inherently intrinsic occurring here as well.

Individuality in the new China is in some form of fluctuation. Industrially and economically, China has allowed a massive accumulation of wealth to occur as individuals are now celebrated for their business acumen and their capacity to both produce and sell Chinese products worldwide. In some ways, this is a celebration of entrepreneurialism that, if read from a Western context, would be a clear reflection of a freedom of the individual. It would be an extension in some way of what has generally been called neoliberalism and would thus articulate a neoliberal subjectivity.

In the Chinese context, and related to its own history of how individuality is positioned, this individuality is not quite the same, though it is influenced by neoliberalism within the context of internal Chinese politics and identity tensions. Hence we need this comparative work on persona to read the way that individualism is expressed in China. Hong-Mei Li (2010, 145) has identified this as the move from cheng-fen, with its origin in class and family value and prestige that was instrumentally part of the Cultural Revolution and its celebration of humbleness in heroism, to shenjia, where the value of the individual becomes associated with money, assets, and the notion of the brand.

The peculiar T-shirt phenomenon, then, could be read as an interesting negotiation of this new tension in Chinese culture expressed through its youth. The T-shirts themselves help present a highly differentiated population with individualized forms of expression, which contrasts with the past’s more regulated sense of dress, or even a form of counterpoint to the military dress that youth have to inhabit periodically in China. They also point to some international and outward-looking quality in the way that a public identity is made. In this way, they are a subtle and underplayed presentation of the branding of the self in the Chinese context. As I mentioned earlier, the focus on brand names is quite limited in this public display relative to other cultures. The T-shirts themselves emerge from many small T-shirt manufacturers and are print-screened individually or in small groups to service this display of a massive variety of different T-shirts. Moreover, the texted T-shirt is generally a very cheap article of clothing, even in the Chinese context: it is designed to be temporary and a signal of quiet and perhaps even apolitical difference.

So, the CCNU student T-shirt phenomenon to an outside observer is a concatenation of a consumer self and a productive/enterprising self. It is presented publicly in an era when there are different relationships between the public, the private, and the intimate that are occurring in the wider sweeps of Chinese and transnational culture and are rippling through the new uses of online culture and social media.

Along with the general experience of travel, the T-shirt phenomenon is an example of how we need to develop carefully comparative persona research and thinking. The intrinsic and extrinsic qualities occur both in the way celebrity culture (see, e.g., Edwards and Jeffreys 2010) is depicted in different settings and in how public comportment of the self is normalized and routinized.