2. The Cate Blanchett Persona at the Oscars

No one is ever who they purport to be. And I suppose I’m not interested in the gap between who we project socially and who we really are.

NOT LONG AFTER her Golden Globe appearance and win in February 2014 in the Best Actress category for her title role in Woody Allen’s Blue Jasmine, Cate Blanchett confessed that she was clearly drunk during her acceptance speech: of course, it became an instant online viral meme. On the celebrity gossip site PerezHilton.com, a rolling gif of her drinking vodka out of a martini glass captures the moment in a way that blends the reality of the award show with her film role seamlessly. The gif is actually her performance in Blue Jasmine and not related to the Golden Globes night or her admission that she was “a couple of sheets to the wind” and that she “couldn’t remember a lot” related to her acceptance speech. Indeed, the reaction to Blanchett’s admission was not shock or horror—it was generally supportive. Her role as a free-falling former socialite in the film somehow made her “real” role of drunken, loquacious Cate an acceptable presentation of a public self, almost a pathway to making the movie just that little bit more authentic.

A star’s public persona is a very tricky business. The relationship to the character she plays is always an interesting negotiation for the actor. She moves from the constructed story of a film to something that is projected in the public world as more real. That public world forms her celebrity status even though it is also layered with constructions and fabrications via red-carpet appearances, talk show vignettes, publicity stills, and the unplanned images produced by paparazzi. Think back to Robert De Niro in Martin Scorcese’s Raging Bull (1980), where he gained forty pounds to play the later life stages of the boxer Jake LaMotta. 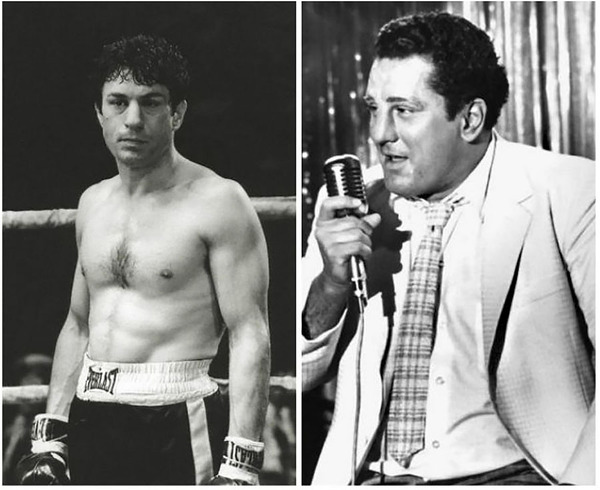 De Niro gained incredible credibility as a devoted actor, which, along with his earlier work in Taxi Driver (1976), defined De Niro for the rest of his career as an intense (with an undercurrent of potential violence), hypermasculine persona. Even in his comedy performances—and here I am thinking of the Meet the Fockers film series as well as hints in his recent Last Vegas (2013) performance—the intensity remains. We know that De Niro is a method actor who completely invests in his past performances, and that level of commitment is what defines his economic value as much as his public persona for his future career, as it has for most of its past. Allowing your film characters to become constitutive of your bankable persona leads to what could be described as the “John Wayne syndrome”—an actor thoroughly typecast in his career, but also an actor who revels in that straitjacket because it defines his stardom and value in the industry.

How do we read Cate Blanchett now? With her current role—a role that presents a pathetic individual who, as an audience, we are drawn to and repulsed by—her broken-down life and her carriage at presenting a persona within the film try to hide that past reality. The performance makes Blanchett into an “actor’s actor” because it plays with the veils of identity and is a study on how those fabrications can become more real and, in this role, more debilitating. Cate Blanchett’s achievement because she has worked so visibly hard at showing and removing these veils of identity in the film has been recognized by many industry awards because it speaks to this industry of performance. She may very well receive the Oscar for this performance on persona itself.

Personas are complex projections and masks, and success sometimes is built when performances, whether in the recorded public world or in films, resonate with each other. The repertoire of Cate Blanchett is heavily defined by its connection to the craft of acting. Thus her five-year directorship of the Sydney Theatre Company builds well with her projection as an actor. Her past roles are heavily coded with strong and independent women. Thus her title characters as Queen Elizabeth I in two major films are as indicative of her strong roles as a villain in Indiana Jones and the Kingdom of the Crystal Skull (2008), her repeat performances as the ethereal but powerful and regal elf-queen Galadriel in Peter Jackson’s Lord of the Rings and Hobbit films, and even a determined woman in The Curious Case of Benjamin Button (2008). Where she has positioned herself also fits into the legacies of Hollywood itself and its definition of independence and strength. Her Oscar-nominated role as Katherine Hepburn in The Aviator (2004) is particularly revealing in its defining the negotiated public persona of Cate Blanchett. Hepburn was a Hollywood legend but managed to create a persona of independence, strength, and quality that allowed her some autonomy in classic Hollywood. In a very active sense, Blanchett is working to assume that mantle, albeit in a changed global Hollywood and a changed and much more visible public culture and display. Like Hepburn, Blanchett has constructed a patrician image that is further augmented by her capacity to convey wealth and status via her use of British and American accents. Her role in The Good German (2006) expands that sense of acting mastery via accents and through filming in black and white, which casts back to a classic Hollywood aesthetic of film noir and perhaps Ingrid Bergman and Lauren Bacall. Blanchett’s accent performance in Blue Jasmine in fact may be her greatest achievement in the film as it reveals both its constructed and contrived presentation of American wealth and its hints of the vulnerability of that presentation. Further adding to what could be called her elite prestige is her connection to glamour. Glamour represents the genuflection to the power of classic Hollywood and its construction of femininity. Through her recent $10.4 million endorsement contract to be the spokesmodel for Armani perfumes, she expresses classic beauty and the power of that image in the most constructed way. Apparently, before he died, Armani said that Blanchett “epitomises the woman for whom I design.”

Too great a distance, too much of a patrician, is dangerous in this new Hollywood world. What makes Blanchett acceptable in this new public world is her Australianness and the valuable asset of having an inside–outside relation to Hollywood itself that also allows her to make fun of her constructed images as she inhabits them in her film performances and her posed elegance for Armani.

Despite all this synergy in a very successful public persona, there are always wrinkles in the presented self as it constantly moves from performance to a mediated public world of news and publicity. As the publicity and news coverage heated up in anticipation of Oscar night, Blanchett had to deal with the new accusations of sexual abuse leveled at her director Woody Allen. Without these accusations, Blanchett’s work with Allen would provide even further cultural cache, particularly in Hollywood and its sometimes peculiar reading of quality; but at that moment, she had to answer to, deal with, and sometimes avoid the way that a scandal can derail the very strong currents that would further establish Blanchett’s persona with an Oscar triumph. The usually in-control but available Cate Blanchett was a little more scarce for further media exposure as Oscar night approached.

Cate managed to pick up the Oscar for her role in Blue Jasmine and functioned as a momentary compromise in the shifting interpretations of the very private Woody Allen’s mixed public persona and his filmic value. Needless to say, Allen was not a winner for director.