1. Stephen Colbert Reveals His True Self

What happens when an actor who has built such an amazing persona must reveal a truer self?

In March 2015, Breaking Bad actor Bryan Cranston appeared on The Colbert Report. In many ways, this is not unusual. The program often has guests who are hyping their latest shows, and Cranston was no exception; he was starring as LBJ, the American president who succeeded Kennedy after his assassination, in the Broadway play All the Way. But Cranston, whose role in Breaking Bad was career defining, while answering a question about how he can act as President Johnson without just doing an impression of the man, cajoled Colbert by asking him whether he knows what that’s like. For an instant, Colbert was invited to leave his parodic persona as a right-wing talk show host, an identity he has inhabited with ferocity since 2007. For an instant, Cranston asked an innocent question between two actors. The identity-confusion gap quickly closed, however, when Colbert shook his head no and denied any real version of himself to squeeze through. 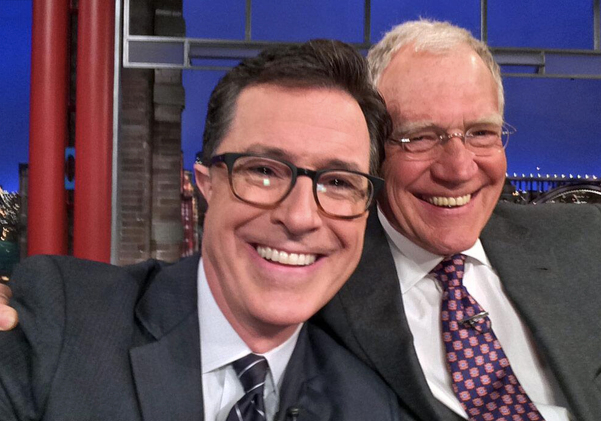 Even this stutter in a performance has a certain normalcy in the Colbert universe. After all, the pleasure of watching The Colbert Report is to revel in the absurdity of his positions, his over-the-top narcissism, and, ultimately, his more than playful parody of the Rush Limbaughs and Bill O’Reillys of the televisual world, and without doubt the entire entourage of Fox News reporters and anchors. The graphics that open the show and provide the segues between segments or “acts” have reconstructed like a parallel universe the American patriotic tilt of images that populate Fox News.

The alluring wrinkle in this performance is the lack of distance between Stephen Colbert and Stephen Colbert the performer of this role: he has no differentiated stage name. Because it is couched in the role of a television “host,” and with even more effect, a news host, the reality effect is that much stronger. The audience inhabits a purgatory position between believing the incredulous comments by Colbert and believing that the real Colbert is entirely aware of the parody itself and that his true self is some polar opposite. Colbert commits to both the right-wing talk show host and—complicit through the perceived insincerity of the penetrating gazes, the double meaning of a raised eyebrow, or an over-the-top reaction and understanding the “inside” jokes—allows this second related persona to be there as part of the complete character.

Colbert’s performance is so overwhelming and energized in its layers and masks of constructed “real” identity that it is hard to imagine him in any other way. The sad truth is that we have to now.

A week after this performance gap with Bryan Cranston, CBS announced that Colbert was to replace the retiring David Letterman as the host of the Late Show. The offer of this position to any comedian is one of the holy grails in American entertainment and is only rivaled by the NBC position of The Tonight Show, now hosted by Jamie Fallon.

Constructions of public identities work in interesting and parasocial ways with audiences. With Colbert, converting his public persona to a real television talk show host demands some sort of dropping of his current masked identity, which paradoxically is how his audiences and the public now perceive him. According to most reports, at least in a public sense, Colbert has only done this about six or seven times in the last eight years. In fact, Colbert has even fronted up to a congressional committee on immigration totally and completely in character.

Hosting the Late Show will produce a qualitatively different public persona. For one, while The Colbert Report persona ridiculed the actual operation of television itself via its home on Comedy Central, the Late Show, however defined by both light entertainment and comedy, is also much more closely identified with traditional notions of television and representation: after all, it is the same network that gave us the most venerated figure of American television—Walter Cronkite.

Also, talk show hosts are traditionally the actual locus for the movement of information about public personalities from the private to the public. The “guests,” who are generally incredibly well known, are there to reveal as much as to construct their public identities further. The host, interestingly, has generally been a pleasant, slightly humorous foil to this engagement in celebrity culture. But, at their core—whether the host is Johnny Carson, Jay Leno, David Letterman, Ellen DeGeneres, or Conan O’Brien—hosts are generally perceived to be portraying their true selves. For example, Carson embodied an urbane and laconic humor, while Letterman occasionally allowed his feigned disinterest to articulate his distance from his subjects and his humor.

So far, Colbert the person—to distinguish him necessarily from the actor and the character—is a very private individual who reveals very little publicly. We know he is a devout Catholic, we know he is married and had a difficult childhood in South Carolina, and we know he learned his approach to performance and comedy from working at Second City in Chicago after studying drama at Northwestern University. Up until now, that personal identity has not been a major force in his public persona. In fact, his totalizing role on The Colbert Report has led to the rare moment in our public culture where the private and the public are not blended and benefit from not being linked.

Perhaps Colbert represents a new form of public persona. His years as being an outspoken “citizen” Colbert who talked about the “nation” and performed right-wing outrage have allowed him to achieve something that the ancient Greeks celebrated: a total separation of private and public life. One inhabited a persona in politics and cultural pursuits, but this was unconnected to the home life and domestic conventions. Persona was the way one structured oneself for the outside world. It was meant to be fabricated, and this allowed for an engagement with politics and an engagement with public and professional life with a mask and a knowingness that there was a kind of rhetoric of position involved.

For more than two centuries, we have seen the inner self as a source for the public self: this was the pathway to truth and enlightenment and even democracy. The fabricated identity of persona was seen as a disguise and the mask of performance, a lie. Celebrity culture, with television talk shows being one of its stalwarts, has been all about revealing the private world that would get us closer to the truth. Even The Colbert Report was all about exposing the bizarre masks of identity of right-wing American cultural icons to get us closer to the truth. Identifying scandal identified those pathways to truth. One of the most influential thinkers of the twentieth century, Hannah Arendt, described this search for truth in the personal as one of the failings of our democratic culture as she recommended a return to the ancient tradition of acceptable public identities for political discourse (Arendt 1958).

Stephen Colbert, as he transitions from total persona to the real talk show host, will be expected to reveal a true self. He may shift these conventions as to what a talk show does and what its host embodies, but my intuition is that he will begin to resemble his predecessors and that the interesting experiment of the totally constructed public persona of The Colbert Report will become just a character that he plays occasionally. I will miss him—that persona whose name rhymed with report (the t’s are silent . . .).

In September 2015, Colbert did indeed take on the role of hosting the Late Show; but the new performance by Colbert became a new and very elaborate game of authenticity about his persona.

On one level, Colbert was no longer shackled by his clearly fictional Colbert Report character. In the first months of the new show, Colbert presented more earnest opinions, had forays into expressions around faith and Catholicism, and even expressed what in American terms could be described as a liberalist political posture. Augmenting this were further efforts to identify his own forms of pleasure in terms of music and interests. His opening monologues worked very hard at establishing this new, more personally “real” identity. At times, Colbert would show he was indignant—probably most prominently following the Paris terrorist attacks of November 13.

On another level, those programs over the same months showed a slightly new and controlled character that was dependent on the old Colbert. It is true that much of his writing team came from his previous program and that Jon Stewart of The Daily Show was listed as an executive producer of the new show. The Late Show with Colbert helming differentiated itself by its remarkable focus on politics, specifically presidential election politics. One of his first guests was Jeb Bush, and this was followed by visits by secretary of state John Kerry, Donald Trump, and Vice President Joe Biden—the list of politicos was endless. In other words, at least one-third of the guests actually resembled the content of the old Colbert Report. Colbert himself remained tightly controlled in dress and manner. What became evident is that not so much a real identity was emerging as Colbert progressed in his new role; what was developing was a new persona slightly mutated from his former “acting” position. His long role on The Colbert Report produced a patterned identity of politics as both funny and compelling. In addition, the shift in identity was to underline how “smart” and “clever” and even intellectual he was, and this smartness made him funny but distinctive from other late-night comedians.

Even more compelling about the new Colbert was a continuing obsession with role and persona, whether in his own monologues or with guests. Star actors such as the quality television series The Affair’s lead actress, Ruth Wilson, and the ubiquitous Morgan Freeman were grilled about how they maintained their roles and personas, which often led to insider-type jokes about how Colbert himself had held an identity for so many years (Samuels 2015). In his regular skit titled “Big Questions with Even Bigger Stars,” Colbert plays with his new spiritual depthness and intelligence lying under the stars with major celebrities like Tom Hanks, Charlize Theron, and Bryan Cranston, pontificating planned banalities about apparently important, meaning-of-life questions. Cleverness around his persona is maintained even by his choice of innovators and entrepreneurs as guests—from Tesla’s Elon Musk to PewDiePie and GoPro’s Nick Woodman.

Colbert’s morphing into a late-night host is thus not an example of revelation of the self. What is compelling about the role change is how the construction of a public persona has moved center stage as an object of scrutiny. Colbert, via humor and in his constrained way, is inhabiting this exploration of this changing public–private divide obsession in our contemporary culture.

2. The Cate Blanchett Persona at the Oscars