The term infrastructure was originally used in the mid-1920s to refer to roads, tunnels, and other public works as well as permanent military structures. It was eventually applied more widely to various “man-made systems and processes that function collaboratively and synergistically to produce and distribute a continuous flow of essential goods and services”—systems like transportation, oil and gas production and storage, water supply, emergency services, government services, banking and finance, electrical power, and information and communications.[1] Aspects of these systems—with their asphalt roads, copper wires, and steel pipes—constitute a layered landscape that lends itself to digging into; they leave material residues that we can dig up. Historical communication networks offer artifacts like pneumatic tubes, gutta-percha-coated telegraph cables, old postal roads, technologies for the production and dissemination of early print forms, palimpsests of writing on city walls, and the ruins of ancient amphitheaters. And for the archaeologists of tomorrow, today’s wireless technologies will leave behind fiber-optic cables, massive data centers, and piles of e-waste.

Sociologist Susan Leigh Star reminds us that infrastructure also includes intellectual and institutional things, such as measurement standards, naming conventions, classification systems, technical protocols, and bureaucratic forms.[2] Our communication networks have long been shaped by government regulations, international trade agreements, zoning and building codes, various industry standards, and a host of other formal and informal policies and practices. These conceptual infrastructures shape the physical infrastructures of the media city, and vice versa. We might even say that our cities are networks of nested or entangled infrastructures; or, as the saying goes, it’s infrastructural “turtles all the way down.” An infrastructure, Star says, is “that which runs ‘underneath’ actual structures[,] . . . that upon which something else rides, or works, a platform of sorts”—but “this common-sense definition begins to unravel when we . . . begin to look at multiple, overlapping and perhaps contradictory infrastructural arrangements. For the railroad engineer, the rails are only infrastructure when she or he is a passenger.”[3] Likewise for the systems administrator losing himself in a game of World of Warcraft. Infrastructure can easily flip between figure and ground; the framing is contextually and situationally defined. Quoting Gregory Bateson, Star suggests that an infrastructure is a “relationship or an infinite regress of relationships. Never a ‘thing.’”[4] Infrastructures might have plenty of entangled material elements, but they can never be reduced to an essentializable “thing.”

Plus, some communication infrastructures offer archaeologists very few things to hit with a shovel. How does one dig into a form of mediation that seemingly has no physical form?[5]
Consider the “sonic city”—the city of radio waves and public address and everyday conversation. Its “artifacts” are primarily sonic, and in most cases, their echoes have long since faded. Yet the material spaces in which those echoes once reverberated can offer invaluable clues about how cities (re-)sounded. It’s particularly in cases like these where media and network archaeologists can benefit from the work of archaeologists proper; we can learn about our media networks by excavating their urban contexts. Archaeology and its subfield of archeoacoustics, along with architectural and urban history and allied fields, can help us to understand, for instance, the ways in which radio and sound waves have interacted with, and even shaped, the material city—how our urban surfaces, volumes, and voids have functioned as sounding boards, resonance chambers, and transmission media. What we ultimately find is that our media histories are deeply “networked” with our urban and architectural histories and that, in many cases, these cultural and technological forms are mutually constructed. 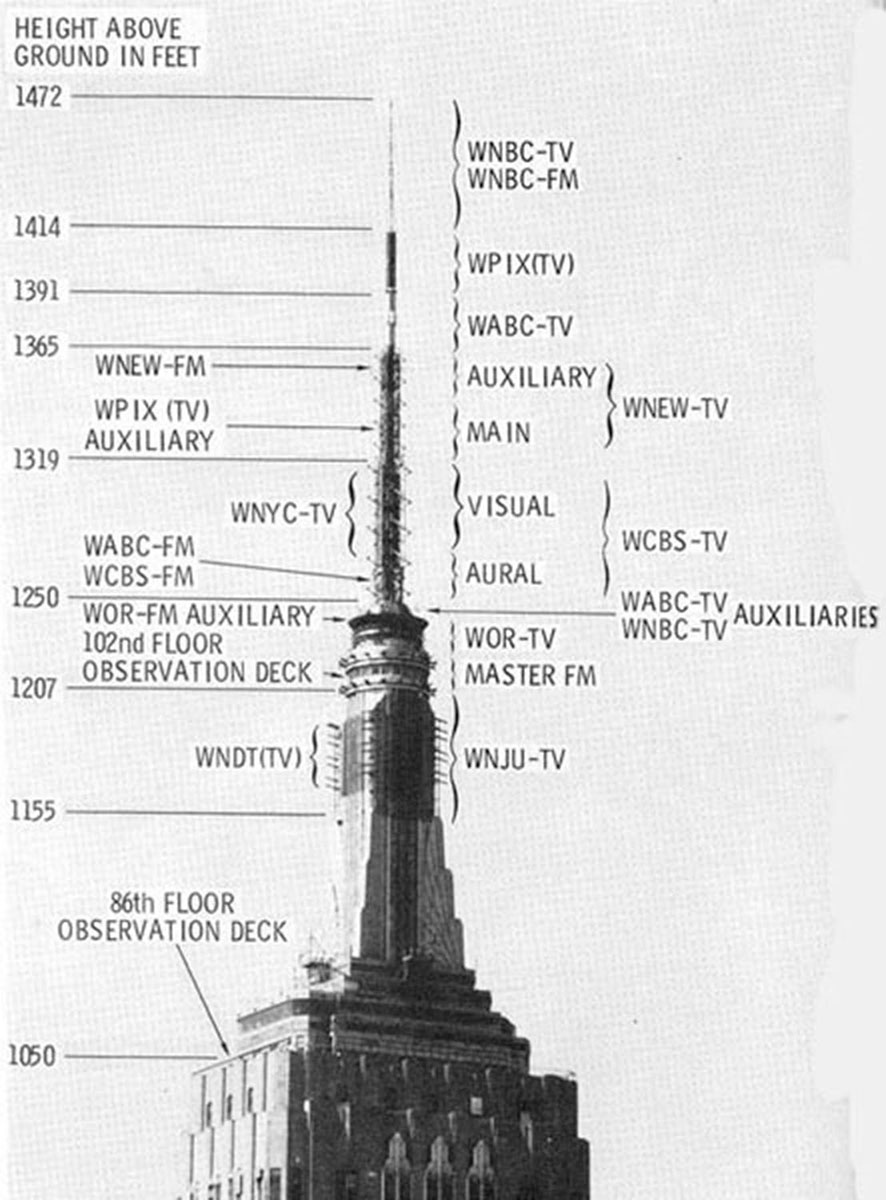 We’ll also discover that there are more epistemological and historiographic resonances between media and network archaeology, and archaeology proper, than we might expect (and perhaps we can even add some mutual political goals, including redressing the “great man” and colonialist histories of some of these fields of study). While media archaeology seeks to offer alternatives to canonized historical media narratives and the “idea of inexorable, quasi-natural, technical progress,” the familiar notion of archaeological “stratification” seems to make manifest the very idea of layered epochs of “progress.”[6] Yet archaeologists have challenged the stratification model, arguing that it “wraps blocks of linear temporality up into periods placed into neatly stacked boxes,” separated by “arbitrary divisions.”[7] Christopher Witmore suggests that the metaphor of the palimpsest presents similar conceptual problems: historical layers aren’t simply “written, erased, and rewritten”; instead, there are plenty of “points of connection, proximity and action between various pasts.”[8] Many archaeologists (some drawing inspiration from Bergson, Deleuze, Serres, Barad, etc.) have embraced the notion of temporal entanglement. If we reject the idea that there are stratified epochs of “revolution”-based history, with new developments eradicating old systems, we need to rethink how the archaeological object—whether an ancient urn or a network of fiber-optic cable—is conceived. Seemingly “modern” things, Witmore says, are “really [just] gatherings of achievements from various times and numerous places.”[9] (The following image shows the myriad discoveries and inventions that had to come before the iPhone for such a device even to be thinkable.) Knowing the modern media city thus requires that we trace the technologies, architectures, economies, social practices, and so on, that are tangled up in its production. And appreciating the entanglement of these histories will help us to move forward, into the future, in a more critical fashion. 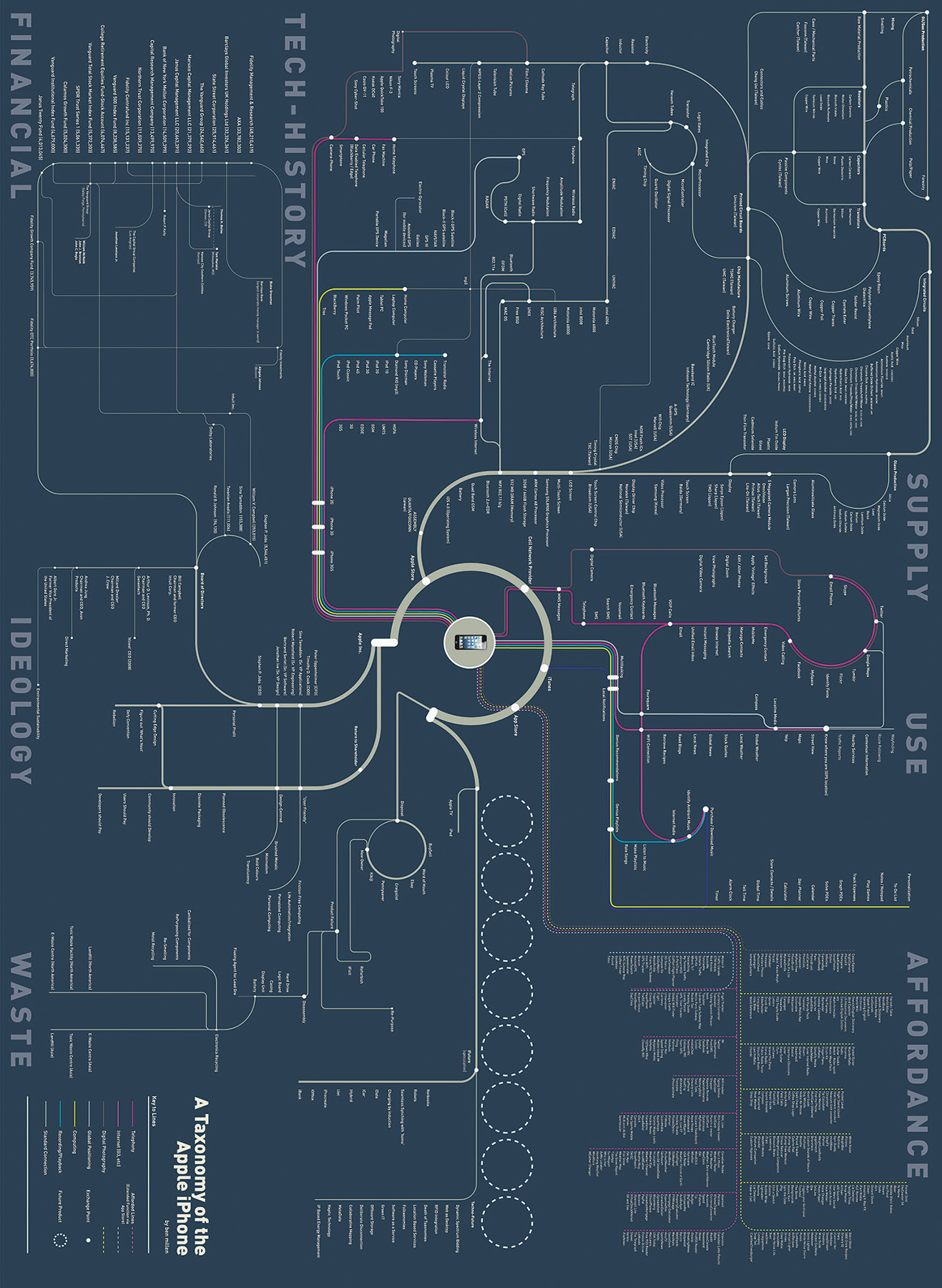 These highly theoretical models actually take shape and become physical in our urban infrastructural landscapes. In many cases, our older infrastructures have lain the foundation for our modern-day systems (as per the technological and economic principle of “path dependency”), but the “old” systems—those we might regard as buried on the “lower strata”—are also very much alive in, and continuing to shape, the contemporary city. These historical media are, like Raymond Williams’s category of the “residual,” “formed in the past, but . . . still active in the cultural process, not only and often not at all as an element of the past, but as an effective element of the present.”[10]

What’s more, these various systems have distinctive temporalities and evolutionary paths; they don’t all “progress” at a standard rate. Through excavation we can assess the life-spans of media networks and ascertain when “old” infrastructures leak into new-media landscapes, when media of different epochs are layered palimpsestically, or when new urban media remediate their predecessors.[11] Richard John, who’s written histories of American telecommunications and the postal system, has found that the infrastructures he’s studied were “complementary rather than mutually exclusive. Telegraphy supplemented mail delivery, and telephony supplemented telegraphy, without rendering either mail delivery or telegraphy obsolete.”[12] Though the electronic and digital ages have dealt serious blows to both the post and telegraphy, new media need not necessarily obsolesce the old; we’ll likely still listen to the radio and scratch out handwritten notes in our “sentient cities” of tomorrow, for instance. Various networks also provide material support for one another. Geographers Stephen Graham and Simon Marvin write that “because of the costs of developing new telecommunications networks,” for instance, “all efforts are made to string optic fibers through water, gas, and sewage ducts; [and] between cities, existing railway, road, and waterway routes are often used.”[13]

Equally significantly, archaeology promotes a more global view. The “media city” is frequently conflated with the “global city,” which is global primarily in that it is a privileged central hub in overlapping international networks.[15] Consequently, much work on the media city focuses on global capitals like New York, Paris, Berlin, London, and Tokyo. Although there is still much insight about urban mediation to be excavated at these sites, and though some scholars have explored areas of the Global South and other underexplored regions of the world, we can do more to look beyond the heavily networked cities that dominate the existing research.[16] By expanding the geographic focus of our study of urban mediation, we can show that infrastructural networks reach parts of the globe that are rarely on our radar and that the network manifests itself differently in different cities. Highlighting this variation can help us to better appreciate the politics of the media city, too—the uneven spread of networks and access to infrastructurally distributed resources, uneven rates of technological development and commitment to maintenance, and diverse systems of ownership and control.

We can see here one node in a citizen-made map of telecom infrastructures in Bangalore. The map’s creators describe how the map, and others like it in the Subjective Cartography series, were made:

We build our subjective maps by combining different methods: photography, film, and sound recording; we use home-made tools and sensors to explore the visible and invisible electromagnetic city; we make measurements by taking water from street vendors and performing DIY biological analysis (with webcams made into microscopes); we adopt psycho-geographical approaches in exploring territory . . . ; we produce expressions of personal subjectivity; and we have meetings with experts and witnesses.

This mention of media in multiple modalities leads us into our next section.