This year marks the second centenary of the creation of the piano. There has been no radical development in the piano since except the advent of the player piano or mechan-ical piano.

The Pianorad, showing the twenty-five tubes and oscillator circuits.

The Pianorad was first demonstrated on Saturday, June 12, during the celebration of Station WRNY’s first anniversary, when it was used to broadcast its music.

Theory of the Instrument

The Pianorad has a keyboard like an ordinary piano, and there is a radio vacuum tube for each one of the piano keys. Every time a key is depressed, there is energized a radio-oscillator circuit which gives rise to a pure, flutelike note through the loud-speaker connected to the device. It is possible to connect any number of loud-speakers to the Pianorad if it is desired to flood an auditorium with its tones. Also, by arranging suitable outlets for loud-speakers on different floors or different rooms, the sounds of the Pianorad can be heard all over any large building.

The musical notes produced by vacuum tubes in this manner have practically no overtones. For this reason the music produced by the Pianorad is of an exquisite pureness of tone not realized in any other musical instrument. The quality is better than that of the flute and much purer. The sound, however, does not resemble that of any known musical instrument, the notes are quite sharp and distinct, and the Pianorad can be readily distinguished by its music from any other musical instrument in existence. In the Pianorad one vacuum tube for each key is connected electrically with certain coils (inductances). Any number of notes can be played simultaneously, as on the piano or organ; unlike the piano, however, the notes can be sustained for any length of time. On the ordinary piano you strike the key and the sound quickly dies away, in the Pianorad, the sound remains as long as the keys are depressed. 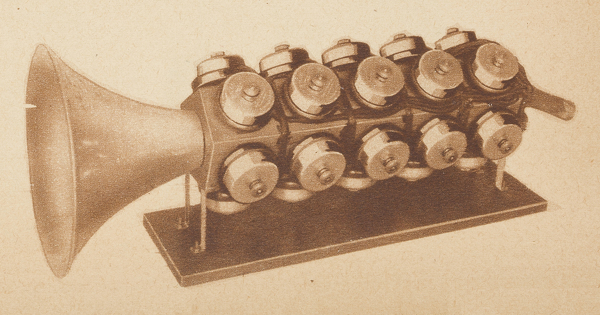 The loud-speaker horn with its twenty-five units separately connected for eliminating harmonics.

The Pianorad has as yet not entered the commercial stage. The instrument illustrated in this article has 25 keys and therefore, 25 notes. A full 88-note Pianorad has as yet not been constructed, but will be built in a short time. The larger instrument could have been built at once, but it would occupy almost as much space as a piano; and as this amount of room was not then available in the studio of WRNY, for which the first Pianorad was especially constructed, the smaller instrument was built instead.

The Pianorad at WRNY is usually accompanied by piano or violin or both; very pleasing combinations are produced in this manner. At present it uses a single stage of amplification, giving volume enough, in connection with one loud-speaker, to more than fill a fair sized room. By adding several stages of audio-frequency amplification, sufficient volume can be obtained to fill a large church or auditorium.

The Pianorad was first demonstrated publicly Saturday, June 12 at 9 P.M., with a number of brilliant selections played on it by Mr. Ralph Christman; the concert being broadcast over WRNY at The Roosevelt, New York.

The principle embodied in this instrument was first demonstrated in 1915 by Dr. Lee de Forest, inventor of the Audion. At that time Dr. de Forest was able to produce musical tones by means of vacuum tubes, but the radio art at that time had not progressed sufficiently to make possible the Pianorad.

An article by Clyde J. Fitch describing the construction of the Pianorad will appear in the December issue of Radio News.

1. The Pianorad is an improvement on Gernsback’s earlier electronic keyboard, the Staccatone, which debuted in Practical Electrics, March 1924, along with instructions on how to build one at home. While the Staccatone consisted of one sine wave oscillator connected to each of sixteen keys—“simple on/off switches [that produced] a sharp staccato note with little control over the attack of the sound,” the Pianorad had significantly more control over the pitch and duration of its notes. Thom Holmes, Electronic and Experimental Music: Technology, Music, and Culture (New York: Routledge, 2012), 30.

According to musician Simon Crab, the redesigned and rechristened Pianorad “had 25 single LC oscillators, one for every key for its two octave keyboard giving the instrument full polyphony, the oscillators produced virtually pure sine tones. . . . Each one of the twenty five oscillators had its own independent speaker, mounted in a large loudspeaker horn on top of the keyboard and the whole ensemble was housed in a housing resembling a harmonium. A larger 88 non keyboard version was planned but not put into production.” Simon Crab, “The ‘Pianorad,’ Hugo Gernsback, USA, 1926,” in 120 Years of Electronic Music: The History of Electronic Music from 1800 to 2015, 2014, http://120years.net/the-pianoradhugo-gernsbakgermany1926/. 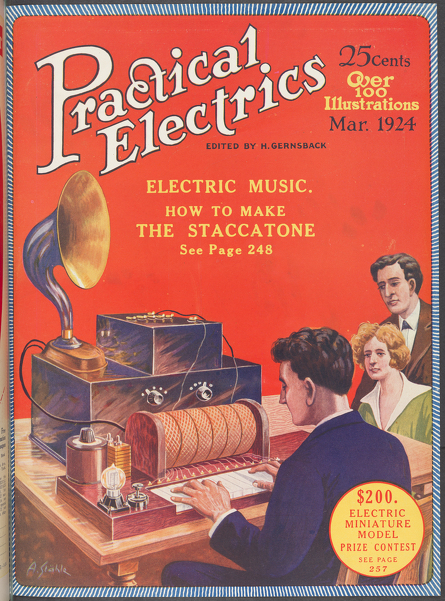 The Pianorad is the invention of Mr. Gernsback, and was built in the radio news laboratories by Mr. Clyde J. Fitch. This is the first time that a musical instrument has been constructed from radio parts; and it should therefore have more than passing attention from all radio interests.