While conducting some experiments in wireless telephony I made the discovery of quite an interesting combination which, to my knowledge of the art, has not been tried up to this date.

To produce mechanical effects directly, man is obliged to exert his muscular forces, by bringing his muscles in contact with the object to be moved, or through an indirect way, namely, by interposing a tool between the muscle and the object.[1] This tool might be a lever or it might be a telegraph key, which latter, if desired, will move or disturb the far-off object through another medium, electricity.

To apply power to an object the hand is used more than any other part of the human body; the foot probably ranges next. The whole body, mostly applied as a lever, follows. The head is practically never used at all. The lungs are used very little comparatively, for instance in glass blowing, etc.

The voice has never been used, no case being on record that a motor or a dynamo was started solely by talking, to or through a medium. I am, of course, well aware that by talking in a transmitter the telephone diaphragm at the other end will vibrate, but that can hardly be called power, it being proved that in most cases the vibrations of a receiver diaphragm measure less than one-five-thousandths of an inch.[2] To provide a contact on the diaphragm in order that the vibrations should close a certain circuit, which in turn could be relayed, to transmit or start power, has always proved a failure on account of the vibrations of the diaphragm, created by the human voice, being exceedingly weak.

My arrangement, as described below, to transmit or start power, etc., simply by talking into a transmitter, will therefore be found novel, especially if it is considered that the transmitter is not connected with the receiving station whatsoever. The transmission is made by means of wireless electric radiations.

No new apparatus being needed in my arrangement, any amateur can easily perform the experiment.

Referring to plan, M represents the common transmitter as used on most telephones. R is a fairly sensitive pony relay of seventy-five ohms. C is a condenser to absorb excessive sparking; I, induction coil; S, oscillator balls. 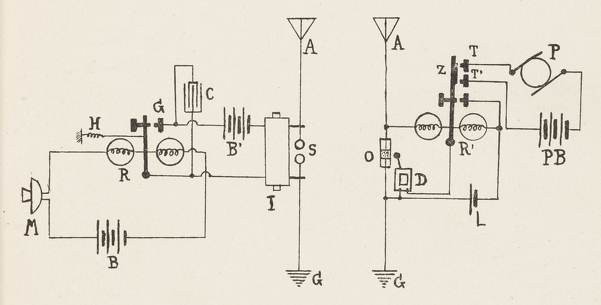 The tension of the adjusting spring H on the relay should be just sufficient to keep the armature away from contact G. With a little experimenting the right tension will be ascertained.

Every time the circuit is closed at G a series of sparks will jump across the balls at S, creating oscillations. These oscillations, traveling through the ether, arrive at the receiving station, where they impinge on the antennae A and operate the coherer O through relay R'. The decoherer D is also shown. Relay, coherer and decoherer are all operated by a single dry cell L.[3] This is the same circuit as in my “Telimco” wireless system.[4] Relay R' has in addition two stationary contacts T and T', which, when the armature Z closes, complete another circuit, as, for instance, through a small motor P, an incandescent light, etc.

As long as words are spoken in the transmitter M, oscillations will be set up in S and the receiving station will work continuously until the voice at M stops. Motor P will, of course, be kept in motion only as long as the voice talks into M.[5]

1. A sentence linking human “muscular forces” to “mechanical effects” in a metaphor that isn’t signaled as such becomes possible thanks to the rise of the “human motor” as a dominant form of political, social, technical, and scientific thought from the late nineteenth century through the interwar period. Anson Rabinbach has shown how labor is transformed into “labor power” over this period, “a concept emphasizing the expenditure and deployment of energy as opposed to human will, moral purpose, or even technical skill.” Predicated on a utopian ideal of a body without fatigue, discourse on the human motor sought to marry the motion of the body with that of the machine: “European scientists devised sophisticated techniques to measure the expenditure of mental and physical energy during mechanical work—not only of the worker, but also of the student, and even of the philosopher. If the working body was a motor, some scientists reasoned, it might even be possible to eliminate the stubborn resistance to perpetual work that distinguished the human body from a machine. If fatigue, the endemic disorder of industrial society, could be analyzed and overcome, the last obstacle to progress would be eliminated.” Anson Rabinbach, The Human Motor: Energy, Fatigue, and the Origins of Modernity (Berkeley: University of California Press, 1992), 2.

2. This is the problem that first led Reginald Fessenden to discover the heterodyne principle in 1901: two electrical waves of different frequencies can amplify one another, even to the point of producing frequencies in the audible range. Hugh Aitken: “The word [heterodyne], now part of every radio engineer’s vocabulary, was Fessenden’s coinage, reflecting his early training in Greek: to heterodyne meant to mix two different forces—in this case, two waves of different frequency.” Fessenden was exploring the question of why early detectors like the liquid barretter couldn’t produce a signal powerful enough to produce sound through a telephone earpiece, or “move the diaphragm . . . at audio frequencies”: “Fessenden’s answer was to feed two currents into the earpiece: one the antenna current, a train of oscillations at the signal frequency, and the other a train of oscillations generated either locally at the receiver or at a second transmitter, with the two frequencies differing slightly from each other. The two frequencies would mix or ‘beat’ against each other, and if the difference between them were correctly chosen, the result would be a wave train that the metal diaphragm of the earpiece could follow and that the human ear could hear.” Much like the sympathetic vibrations of a piano tuner or undamped guitar strings, these two currents resonate with one another. Hugh G. J Aitken, The Continuous Wave: Technology and American Radio, 1900–1932 (Princeton, N.J.: Princeton University Press, 1985), 58.

3. The coherer, first designed by the physicist and inventor Édouard Branly (1844–1940) in 1891, is one of the earliest forms of detector, the most important component of a wireless set. The detector is responsible for demodulating radio frequency signals into an audio frequency current, ready to be piped through the listener’s headphones. The idea behind the coherer is that when a radio frequency signal is applied to a glass vial filled with metal powder, the metal filings will “cohere” and an electrical current will pass through the device. Each telegraphic “dot” or “dash” causes the filings to cohere, after which some form of “decoherer” mechanically taps the vial to loosen them once again.

It was left for Marconi to, in the words of electrical engineer Thomas H. Lee, combine Hertz’s spark-gap transmitter with Branly’s coherer and “tinker like crazy” to produce the first wireless telegraph set. It is worth noting that the physical principle behind the coherer’s operation is still not understood today. It remains a device with practical applications whose inner workings are nevertheless not understood. Thomas H. Lee, “A Nonlinear History of Radio,” in The Design of CMOS Radio-Frequency Integrated Circuits (Cambridge: Cambridge University Press, 2004), 3.

4. The Telimco—a portmanteau of “The Electro Importing Company” and their flagship product—was the first fully assembled radio set ever sold to the American public, with transmitting and receiving models made available. For the Dynamophone described here, imagine a Telimco transmitter retrofitted with a telephone mouthpiece, and a Telimco receiver hooked up to some form of motor. As long as the user speaks into that mouthpiece on the transmitter, the motor on the receiving end would run.

Blueprints for such jury-rigged apparatuses were typical of Modern Electrics at the time and were presented as if they were easily replicable by readers who could stock their home workshops with parts from the Electro Importing Catalog. This issue, for instance, also contains instructions by Gernsback for building an alarm clock (“An Electric Sun Alarm”) connected to light-sensitive selenium cells (used in early television prototypes—see Television and the Telephot in this book) that would set the alarm ringing when hit by the morning sunlight. This issue also contains the first winner of a regular “Laboratory Contest” section. Reader Irving Kimball impressed with the submission of his “vitaphone,” a unique device that synced a motion picture projector with sound reproduction. 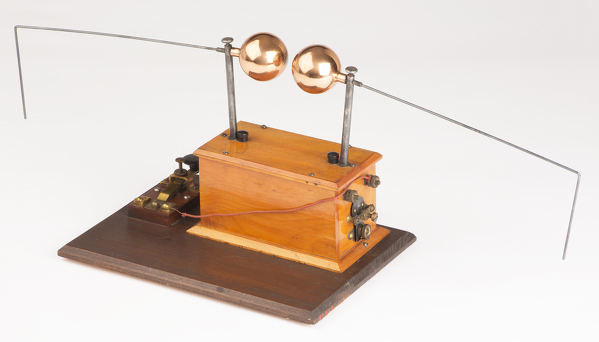 Replica of the 1906 Telimco Spark Transmitter, Model 1086. From the Collections of The Henry Ford. Gift of Hugo Gernsback.

5. Although the coherer wasn’t as sensitive as later electrolytic and crystal detectors, it had the merit of being the only one to work in mobile applications until the late 1910s. In a later editorial on what he refers to as “radio kinetics,” Gernsback details the shortcomings and unique benefits of the coherer. Hugo Gernsback, “Radio Kinetics,” Radio Amateur News 1, no. 12 (June 1920): 677.