The “New” Science and Invention

This issue of Science and Invention witnesses an important and far reaching innovation, not only in the magazine field, but in the technical press as well. For some time we have felt that Science and Invention was not fulfilling its mission as it should. When this magazine was first established in 1913, as the Electrical Experimenter, it was a highly technical magazine and its circulation reached a figure of not more than 100,000. The reason for this was that there are only a limited number of technical-scientific readers in the country who can support such a magazine. Consequently in 1920 the magazine broadened its scope and changed its name to Science and Invention. Sometime previous to the change of the name, the magazine had not been strictly electrical nor strictly experimental. It had been found necessary to embrace other scientific lines in order to satisfy the demands of its readers. Then when the magazine became known as Science and Invention, the circulation quickly jumped up close to 200,000 copies in 1921. The reason, of course, was that more readers were interested in the sort of matter we published at that time and the material we have been publishing ever since.

But recently we have been aware that we could give our readers more for their money. Along the old and established line of publishing, we printed illustrations and lengthy articles. Often it was necessary to reduce illustrations to such an extent that they did not show up very well. This was necessitated by the fact that we had to run so much text.

A diligent canvas among many readers of Science and Invention tended to show that few people actually read the articles. Most of them studied the illustrations and read the captions. We point with pride to our illustrations and particularly to the technical ones. We have been fortunate to secure artists who know how to illustrate difficult subjects in such a way that words really become superfluous.

Moreover, in these days, people do not wish to read if they can help it. A picture or illustration correctly made can tell a story more eloquently than 5,000 words. That is one of the reasons why motion pictures have been so eminently successful; pictures, a few titles, and the story is told far better than any book could do it.

Bearing these things in mind, we have come to the conclusion that the world really needs an entirely new sort of magazine. The answer is simple. Nothing but pictures, with captions, to explain the story. The result is the new Science and Invention now in your hands. The editorial policy remains exactly the same as before. No changes have been made as you will notice. Instead, we are offering three to four times as much material as we have ever offered before.[1] All of our departments, as you will note, have been reduced to pictures and captions, with the exception of our scientific fiction stories which for the time being will run on as usual. The reason is that the average man or woman does not wish to laboriously wander through miles of text of scientific facts, which means concentration and study. With fiction, however, this does not hold true because fiction is an entertainment; it does not require study. On the other hand, we have tried to reduce all scientific matter to entertainment instead of study. As to how successful we will be in this issue and subsequent ones, you are the sole judge. At any rate, we believe there is a very large public interest in scientific matters and if such matter can be presented in an easily digestible form, it will, we hope, be welcomed by the multitude.

If we make it possible for the man in the street to absorb scientific knowledge without headaches and without trepidation, we believe we shall have accomplished a distinct service to humanity. To the average man, Science means a musty book, sealed with 7 seals. The average man will have none of it. If on the other hand we can show your mother, your wife, or your children that Science is a most interesting subject of which every one in all walks of life should know more, then we believe that we shall have achieved our goal.

Science in all its phases, is the most wonderful thing that the world has ever known and it is just beginning to come into its own. Not so very many years ago, men were burned at stakes and murdered for inventing or thinking up something new. Today the scientist is glorified. Science touches every one of us in one way or another, and is regulating and running our very lives. Science and invention are the direct causes of our huge fortunes, our great industries and the greater part of our national wealth. It will be our purpose to disseminate such scientific knowledge, not only in a palatable manner, but in a way that “he who runs may read.”

In conclusion, may we ask a personal favor of you? Please write and tell us frankly how this first issue of the new Science and Invention strikes you. 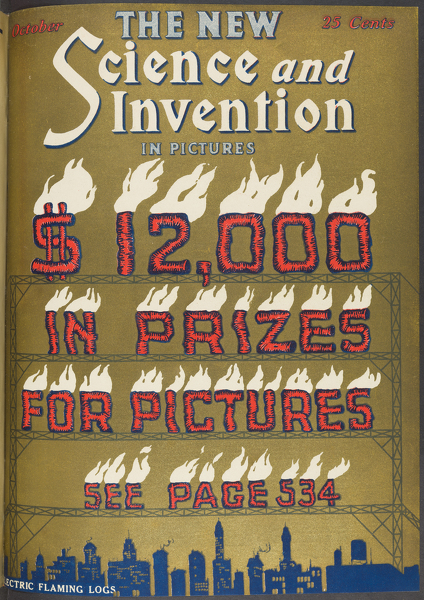 October 1923 cover of Science and Invention.

1. The length of the magazine remained at just over a hundred pages per issue. Gernsback is likely referring here to the quantity of illustrations and the number of topics the redesigned Science and Invention covered. 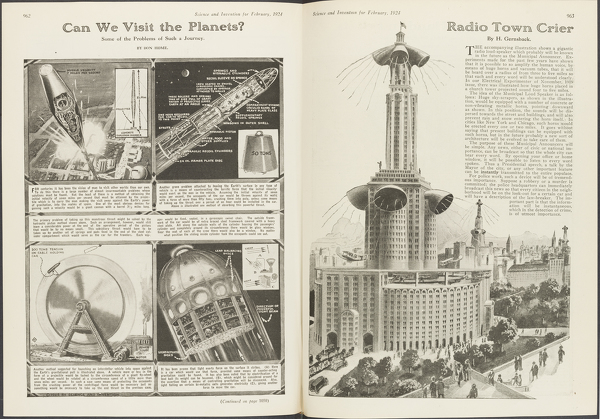 A spread from the redesigned Science and Invention.