The Wireless Association of America

It affords the Editor genuine pleasure to offer to the thousands of wireless enthusiasts an appropriate New Year’s present in form of the Wireless Association of America. Every reader perusing the announcement of the association, found elsewhere in this issue, will agree that such an organization has been needed for a long time.

Wireless Telegraphy may now be said to have left the experimental stage. It has become an everyday necessity, and already rivals the wire and cable telegraph. Between sea and land wireless is of the utmost importance and to-day forms as necessary an adjunct to every up-to-date vessel, as its coal and lifeboats.

Only a few days ago Wireless demonstrated anew its utility. Several Italian warships were at sea, when the disaster occurred in southern Italy, necessitating prompt assistance by outside help. The warships were at once recalled by means of wireless, and through it have saved the lives of hundreds of sufferers and brought the much needed relief.[1]

Not alone on sea, or between land and sea, but on the mainland also, Wireless is of high importance. Only a few weeks ago two young Wireless experimenters saved several hundred lives in southern France in a dramatic manner. One of the young men, living on a hill near a dam, discovered that it was giving way, which meant the destruction of a small village in the valley below and the drowning of hundreds. He promptly “called up” his friend living in the village below who gave the alarm. Over two hundred people reached the mountain in safety, just in time to avoid the flood. Without Wireless they would have been surely drowned, as telephone and telegraph are unknown in that locality and the person in charge of the dam was sick on account of a recent accident.

The greatest aim of the Wireless Association of America is to bring young experimenters together—not in clubs, but in practical work.[2] The Editor would like to see every reader of “Modern Electrics” in possession of a wireless station; there is really nothing more instructive and entertaining than a wireless between two isolated, or for that matter, distant points in a city. The necessary instruments, thanks to competition are now so cheap that they are in reach of everybody, and we have as yet to hear of the person regretting an investment in wireless instruments.

The Association’s button will also be of great help to bring young experimenters, unknown to each other, together. As only a few thousand buttons were ordered, prospective members should send at once for same, as it will take several weeks to obtain a new supply.[3]

The Wireless Association of America has been founded with the sole object of furthering the interests of wireless telegraphy and aerophony in America.

We are now on the threshold of the wireless era, and just beginning to rub our intellectual eyes, as it were. Sometimes we look over the wall of our barred knowledge in amazement, wondering what lays beyond the wall, as yet covered with a dense haze.

However, young America, up to the occasion, is wide awake as usual.

Foreign wireless experts, invariable exclaim in wonder when viewing the photographs appearing each month in the “Wireless Contest” of this magazine. They cannot grasp the idea that boys 14 years old actually operate wireless stations successfully every day in the year under all conditions, but they are all of the undivided opinion that Young America leads the rest of the world wirelessly.

Even Dr. Lee de Forest, America’s foremost wireless authority, confessed himself surprised that so many young men in this country should be in the possession of such well constructed and well managed wireless stations, which is only another proof that the clear headed young men of this country are unusually advanced in the youngest branch of electrical science.[4]

So far America has lead [sic] in the race. The next thing is to stay in the front, and let the others follow. In fact he would be a bold prophet who would dare hint at the wonders to come during the next decade.

The boy experimenting in an attic today may be an authority to-morrow. However, not even the cleverest inventors or experimenters always have opportunity of making themselves known to the world, and it is right here that we are confronted with a mystery so far unsolved. Out of 100 per cent of young wireless experimenters, 90 per cent are extremely bashful. Why this should be so is a mystery.

As stated before the new Wireless Association’s sole aim is to further the interests of experimental wireless telegraphy and aerophony in this country. Headed by America’s foremost wireless men, it is not a money-making institution. There are no membership fees, and no contributions required to become a member.

There are two conditions only. Each member of the Association must be an American citizen and MUST OWN A WIRELESS STATION, either for sending or for receiving or both.

The Association furnishes a membership button as per our illustration. This button is sold at actual cost and will be mailed to each member on receipt of 15 cents (no stamps nor checks).

This button is made of bronze, triple silver-plated. The flashes from the wireless pole are laid in in hard red enamel, which makes the button quite distinctive. The button furthermore has the usual screw back making it easy to fasten to buttonhole. The lettering itself is laid in in black hard enamel. Size exactly as cut.

On account of the heavy plating it will last for years and is guaranteed not to wear “brassy.”

Its diameter is ¾ inch. This is a trifle larger than usual, the purpose being to show the button off so that it can be readily seen from a distance. The reason is obvious. Suppose you are a wireless experimenter and you live in a fairly large town. If you see a stranger with the Association button, you, of course, would not be backward talking to the wearer and in this manner become acquainted with those having a common object in mind, which is the successful development of “wireless.”

The Association furthermore wishes to be of assistance to experimenters and inventors of wireless appliances and apparatus, if the owners are not capable to market or work out their inventions. Such information and advice will be given free.

Somebody suggested that Wireless Clubs should be formed in various towns, and while this idea is of course feasible in the larger towns, it is fallacious in smaller towns where at best only two or three wireless experimenters can be found.

Most experimenters would rather spend their money in maintaining and enlarging their wireless stations, instead of contributing fees to maintain clubs or meeting rooms, etc., etc.

The Board of Directors of this Association earnestly request every wireless experimenter and owner of a station to apply for membership in the Association by submitting his name, address, location, instruments used, etc., etc., to the business manager. There is no charge or fee whatever connected with this.

Each member will be recorded and all members will be classified by town and State.

After February 1st, 1909, members are at liberty to inquire from the Association if other wireless experimenters within their locality have registered. Such information will be furnished free if stamped return envelope is forwarded with inquiry.

To organize the Association as quickly as possible it is necessary that prospective members make their application at once, and without delay.

If you are eligible fill out application sheet and state particulars as follows: Full name; town; state; age; system and apparatus used; full description of aerial.

In order to facilitate quick classification, please be brief and keep application sheet separate from your letter.

“But I think I can summon help.”

“How?” demanded Mr. Hosbrook. “Have you managed to discover some cable line running past the island, and have you tapped it?”

“Not exactly,” was Tom’s calm answer, “but I have succeeded, with the help of Mr. Damon and Mr. Fenwick, in building an apparatus that will send out wireless messages!”

“Wireless messages!” gasped the millionaire. “Are you sure?”

“I’ll give—” he paused, clasped his hands on his belt, and turned away.

“Oh, Tom!” cried Mrs. Nestor, and she went up to the lad, threw her arms about his neck, and kissed him; whereat Tom blushed.

2. In addition to numerous local clubs around the country, rival publications attempted to build their own national organizations of wireless operators. Electrician and Mechanic started a “Wireless Club” the previous year, garnering a modest 114 members as of September 1908. A monthly section of the magazine, “Wireless Club,” published short letters from its members: “experiences, discoveries, and suggestions, which may be helpful to all interested.” The first installment is available at Thomas H. White’s United States Early Radio History site: http://earlyradiohistory.us/1908wc2.htm. The Wireless Age formed a National Amateur Wireless Association in 1915 with a greater emphasis on citizen preparedness for potential war. Major J. Andrew White, editor of The Wireless Age and announcer at the famous 1921 experimental radio broadcast of the Jack Dempsey v. Georges Carpentier fight, wrote that he hoped this organization would help boys from the ages of twelve to eighteen “learn what military discipline means, accustom themselves to the rigors of camping and forced marches, perfect themselves in the operation of portable wireless equipment and become trained soldiers in embryo.” J. Andrew White, “A Word with You,” The Wireless Age (December 1915): 184–88.

Hiram Percy Maxim proposed a different idea for a wireless organization in 1914: one that would explicitly work toward relaying messages across long distances, in effect forming a communications network of small, volunteer broadcast stations. This American Radio Relay League formed its own magazine, QST, and though it tried to collaborate with the Wireless Association of America, Electrical Experimenter refused to publish advertisements for the ARRL, writing that it was “distinctly competitive to The Electrical Experimenter.” A secretary of the AARL wrote to Milton Hymes, The Electrical Experimenter’s advertising manager, trying to convince the then-largest wireless publication in the country that “We regard the Electrical Experimenter as a companion magazine; a magazine of an entirely different type. Your paper is devoted to articles which would interest an experimenter and one who wished to keep abreast of the electrical news. Our paper is to keep each amateur in touch with the other regarding the operations of their stations.”

But The Electrical Experimenter held firm. QST published this correspondence in its July 1916 issue, and a bitter rivalry ensued between the two organizations. See Thomas H. White, “Pioneering Amateurs,” United States Early Radio History, 1996, http://earlyradiohistory.us/1910ei.htm. The letters exchanged between QST and The Electrical Experimenter are available at http://earlyradiohistory.us/1916QST.htm. 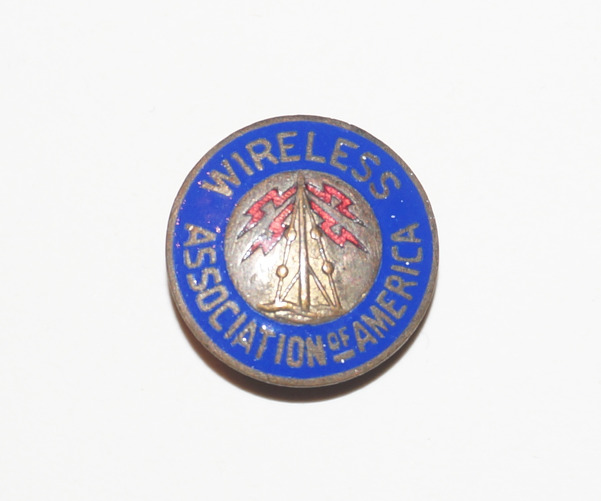 4. Lee de Forest, an inventor of the vacuum tube (which he called the Audion), had a troubled relationship with Gernsback. They began as close associates, with De Forest contributing to some of the earliest issues of Modern Electrics, serving as President of the Wireless Association of America’s Board of Directors, and presenting alongside Gernsback at industry banquets. See “Wireless Banquet,” Electrical Experimenter 2, no. 1 (April 1909): 24. But De Forest later sued Gernsback for patent infringement, claiming that the Electro Importing Company was selling devices that used his Audion technology without paying royalties. The $4.00 Electro Audion, sold from 1911 to 1913 in the Catalog, is most likely one of the products he had in mind. Although the court sided with Electro Importing, arguing that the devices they manufactured contained significant enough improvements on the original Audion design, De Forest continued to contribute to the Gernsback magazines for years to come. Hugo Gernsback, “De Forest vs. The Electrical Experimenter,” Electrical Experimenter 4, no. 11 (March 1917): 808.